The ins and outs of immune boosting
The immune system is like rush-hour on the road. There are so many parts moving in so many directions and at so many speeds that it looks like chaos. But somehow, it still works. And everyone still gets where they need to go. Here's how to get them there faster and better.

It sounds like "antibiotic" because it does the same thing. But without the side-effects, naturally. It's 100% pure, stabilised allicin, the infection-fighting ingredient in garlic.

A potent blend of 13 organic mushrooms, for improved immunity and enhanced energy. They're not magic, but they are medicinal. Which is even better.

20-billion colony forming units of 10 probiotic bacteria and yeast per dose. Plus two of their favourite prebiotic fuels for growth. It all adds up to better digestion and increased immunity. Do the math 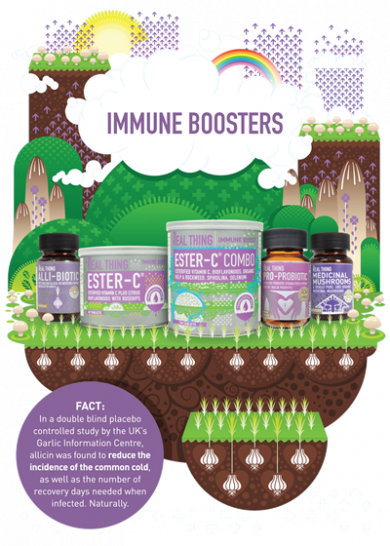