The Real Thing Anti-X Capsules
Naughty oxidants can cause accidents. In your body. They may be roaming and free, but they're ALWAYS radical. Enter the strapping superhero – ANTI-X. Containing nature's ultimate carotenoid antioxidant, AstaREAL L10, ANTI-X can help rescue the body from damage caused by evil oxidants. Fight them. Beat them. Send them packing.

H. pluvialis isn't a slimy character. He's friendly. And dietary carotenoids love him. As sources of antioxidants, carotenoids help the body to maintain an optimal balance of antioxidants and oxidants. Think about it this way: if ANTI-X is the superhero, then carotenoids are his superpowers. ANTI-X contains these carotenoids:

We have faith in our superhero ANTI-X for many reasons, but mostly because he's believed to be the most concentrated source of natural Astaxanthin there is.

FACT: Astaxanthin is reported to have over 500 times more antioxidant activity than vitamin E, to be up to 10 times stronger than beta-carotene, and to be more powerful than alpha carotene and lycopene. BOOM!

How does it help?

WHAT MAKES ANTI-X THE REAL THING?

Don't take ANTI-X if you're allergic or hypersensitive to:

Speak to your doctor before taking ANTI-X if you:

Astaxanthin is generally well-tolerated but could:

If you experience changes in vision, discontinue use. Don't be shy. If you notice any worrying side effects, speak to your doctor, pharmacist or other health care professional.

HOW TO TAKE ANTI-X

Important: Supplements should not replace a healthy, balanced and varied diet.

Adults over 18 years of age: Take 2 capsules daily with food.

Don't use more than the recommended dose, unless under the guidance of your doctor. In general, speak to a doctor or pharmacist before taking any supplement.

If you accidentally take more ANTI-X than you should, stop taking it and re-start at the recommended dose a week later. In the event of over-dosage, consult your doctor or pharmacist. If that's not possible, seek help at your nearest hospital.

If you forget to take ANTI-X, don't panic. Just start again at the regular dose. Don't take a double dose to make up for lost time. And set a reminder on your phone.

Keep in mind that the benefits and improvements you've gained from ANTI-X may decline if you stop taking it regularly.

ANTI-X is an oval transparent soft-gel capsule containing an oily liquid that is packed in hard cardboard containers with a metal base and top, covered with a clear plastic lid.

Store in a cool, dry place, below 25°C, out of direct sunlight. Don't use after the expiry date on the container. It's a good idea to return any unused or expired capsules to your pharmacist for proper disposal.

KEEP OUT OF REACH OF CHILDREN. 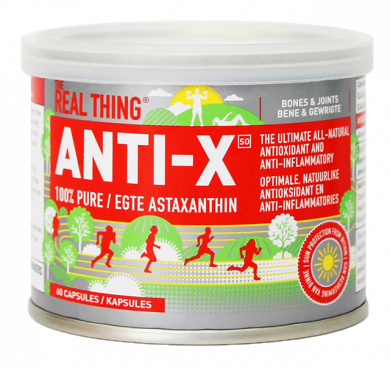