1. ESTER-C®
What? It’s a unique patented formula, produced through a chemical reaction that esterifies ascorbic acid, or vitamin C.

So what? Yes, it functions like vitamin C biologically, but the Ester-C® version is absorbed around 400 times quicker and won’t irritate the stomach. And that’s not all that makes it special.

FACT: A double-blind, placebo-controlled study published in Advances in Therapy in 2002 found that Ester-C® led to fewer colds, fewer days of viral infection and a quicker recovery from severe symptoms. Nice.

HOW DOES ESTER-C® HELP YOU?

What? Sea vegetables are nutritional royalty. In fact, they’re the most nutrient-dense plants on the planet.

What else? Our Icelandic kelp and Norwegian rockweed are organically grown and specially harvested. The perfect nutritional and immune pedigree.

“There is no family of foods more protective against radiation and environmental pollutants than sea vegetables... [They] can prevent assimilation of different radionucleotides, heavy metals such as cadmium, and other environmental toxins.” From Fighting Radiation with Foods, Herbs and Vitamins by Steven Schecter, N.D.

What else? Our spirulina is grown locally, organically and very carefully. That’s why it’s particularly nutritious and immune-fuelling.

FACT: Spirulina has more of everything. It has three times more protein than meat, milk or eggs, 20 times more beta-carotene than carrots, 250 times more vitamin B12 than liver and around 12 times more iron than, well, anything else.

What? They’re found in citrus fruits (who would’ve thought) like lemon, orange, tangerine and grapefruit. They have antioxidant, anti-inflammatory and anti-carcinogenic effects.

What else? Citrus bioflavonoids are essential for vitamin C absorption. They also amp up the vitamin’s action and protect it from oxidation. That’s why they made the cut into The Real Thing Ester-C®.

FACT: The citrus bioflavonoids in The Real Thing Ester-C® Combo are reinforced by antioxidant rosehips. The result?  Even better absorption of vitamin C. If that’s possible.

WHAT MAKES ESTER-C THE REAL THING?

HOW DO YOU TAKE IT? 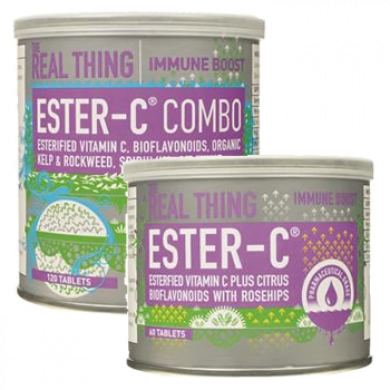