Background: Why you need omegas

If there was ever an action movie about fats, the omega fatty acids would play the good guys. Obviously. Saturated fats would play the bad guys. And trans fats too. But, if it ever came down to a turf war, the omega gang – led by the omega 3s – would kick bad-fat butt. Why? Because they can.

What? The long-chain omega 3s, docosahexaenoic acid (DHA) and eicosapentaenoic acid (EPA) are considered the most important fatty acids in the omega 3 family. The Godfathers, if you will. They’re called “essential” fatty acids because, although your body needs them for good health, it can't produce them in-house. So they have to be ordered in, either from the food you eat or from supplements.

Why? Getting the right amount of EPA and DHA can boost health on many levels – particularly when it comes to supporting...

Where? To get the right amount of omega 3 you have to choose the right food and the right supplements – namely omega-3 rich foods like oily fish, and supplements like The Real Thing Mega Omega range.

What? These omega 3 sidekicks – such as gamma-linoleic acid and linoleic acid – are also “essential” fatty acids that the body needs but can’t manufacture.

Where? Found mostly in vegetable oils and meat. They’re also present in plant-based oils, such as evening primrose oil and borage oil.

What? Oleic acid, or omega 9 for short, can be made by the body in small amounts – making use of its building blocks omega 3 and omega 6 when present. So this fatty acid is often obtained through food.

AN INTERESTING FACT ABOUT FISH OILS: There’s been an increase in interest in marine oils following observations that populations with a diet rich in fish oils generally have a lower incidence of cardiovascular disease. The Mediterranean Diet might be Greek to you, but it makes omega 3 sense. It's all about fresh produce, whole grains, less animal fat and more omega-3 rich oily fish.

This unregistered medicine has not been evaluated by the SAHPRA for its quality, safety or intended use. / Hierdie ongeregistreede medisyne is nog nie deur die SAHPRA geevalueer vir kwaliteit, veiligheid of voorgestelde gebruik nie. 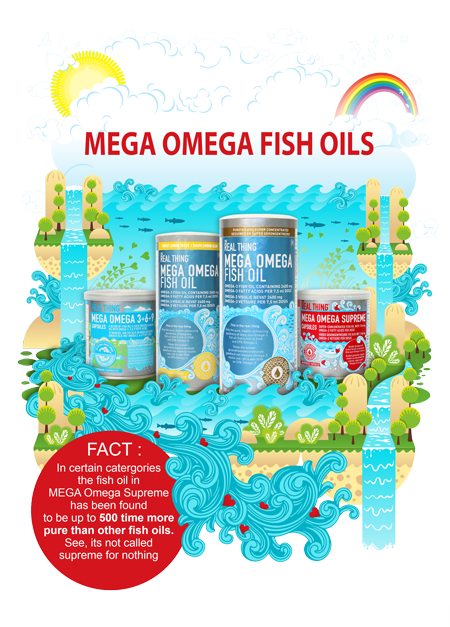